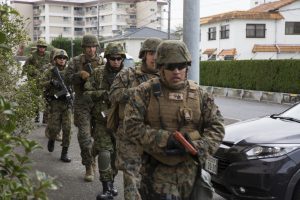 Active Shield is an annual exercise incorporating the air station’s defense posture to test the abilities of U.S. and Japanese forces to work alongside each other to protect and defend MCAS Iwakuni and other U.S. assets in the region.

The U.S. and Japanese forces shared their techniques in different scenarios ranging from standard vehicle searches, response to suspicious packages, perimeter breaches, chemical attacks and other possible scenarios while being on station… Read more here.