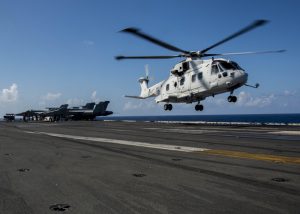 WATERS SOUTH OF JAPAN (NNS) — Directed by the commander of U.S. Forces Japan and the Chief of Staff of the Japan Joint Staff, KS17 is the latest in a series of joint and bilateral field training exercises since 1986 involving U.S. military and Japanese Self Defense Force (JSDF) personnel designed to increase combat readiness and interoperability of the Japan-U.S. alliance.