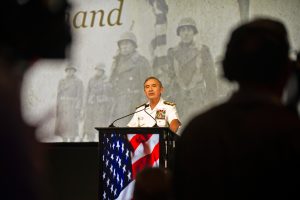 HONOLULU, Dec. 6, 2016 — Japanese-Americans served and fought valiantly for the United States during World War II, demonstrating bravery and loyalty in the face of hostility and discrimination, shaping the nation we live in today, according to the commander of U.S. Pacific Command.

“The Nisei warriors literally shaped our military and our nation,” Harris said at the event at the Hawaii Convention Center here that is part of the events commemorating the 75th anniversary of the Pearl Harbor attack… Read more here.