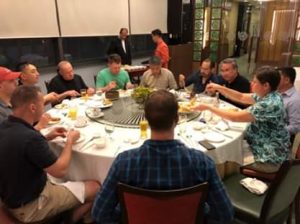 This was the first JUMP event to be held outside of the Washington, D.C. area and was sponsored by the Sasakawa Peace Foundation U.S.A. and the National Association of Japan-American Societies to honor the Navy in San Diego’s ties to Japan.

“JUMP is the celebration of the military relationship between the United States and Japan which has been a strong one for the past 70 years,” said Dave Tuites, president of the Japan Society of San Diego and Tijuana. “We are fortunate to have such an electric group of active duty, retired military, family members and others with a tie to the country of Japan here tonight.”

“It’s so great to see this group here, this mixture of young and old, active duty and retired military, all of whom are united as baseball fans,” said Leonard, speaking on behalf of the Consulate-General of Japan in Los Angeles. “For the past 70 years the U.S. and Japan military ties have been essential in maintaining the peace in the Pacific.”

With USS Ronald Reagan (CVN 76) headed to join the Forward Deployed Naval Forces (FDNF) in Yokosuka, Japan, this month, Crozier focused his remarks on how excited the crew is to be going to Japan.

“To tell you we are excited would be an understatement,” Crozier told the group during his remarks. “We have been working very hard to provide the best, most capable aircraft carrier to send to Japan. Our partnership and alliance in that region is strong, we know that.”

Ronald Reagan was one of the first responders during Operation Tomodachi in 2011 after the earthquake and tsunami, establishing a strong tie between the ship and the community of Japan. In addition, the ship recently completed a maintenance period where it had many of its systems upgraded to become one of the most technologically advanced warships before joining the FDNF.

As the “Navy Mayor” of San Diego, Rich spoke about the importance of the relationship between the Navy and the country of Japan and his commitment to support future JUMP events on the West Coast.

Military retirees and family members also took part in the event which included a welcoming ceremony, buffet dinner and tickets to the game where the San Diego Padres defeated the Cincinnati Reds 2-1.

JUMP connects past and present service members, families, and government civilians who have served in Japan. Through social networks and events, JUMP builds relationships and provides opportunities for service members to engage with each other. JUMP also provides a powerful foundation for sustaining the solid alliance and relationship that exists between the U.S. and Japan.