As part of JUMP’s ongoing initiative to reach out to those who have served in Japan, JUMP intern Sandra Silva interviewed Sgt. Samantha Torres, who served in Okinawa, Japan, from 2013 to 2017. Since returning to the United States, she has dedicated herself to the study of the Japanese language in the hopes of returning to Japan and maintaining the meaningful relationships she developed while stationed there.

How did you learn about JUMP?
I learned about JUMP from the website of the Ministry of Foreign Affairs of Japan.

Before going to Japan, how much did you know about Japan and Japanese culture?
As a teen-ager in Puerto Rico, I saw my first anime, called Sailor Moon, and began to research more about animation. I began to learn to draw anime on my own and told my father that I would like to study and live in Japan. I knew very little of Japan until I enlisted in the military. Many people who I grew up with and worked with in the military didn’t believe I could ever get stationed in Japan but this young dreamer didn’t let anyone change her mind. Therefore, as a Specialist, I did my own research and found out that I could request an overseas assignment. Once I received a response saying I could be stationed in Japan, I was ecstatic and left to the land of the Rising Sun with my family. 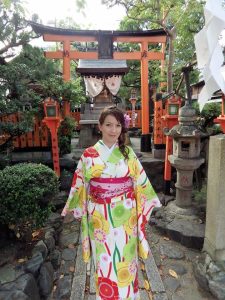 How often did you get to interact with and talk to Japanese people?
Every day I interacted with my Japanese friends and coworkers. I always tried to look for a way to not only talk Japanese with the local nationals but also to give them my time and serve their community as much as possible.

Did you have instances where you experienced ‘culture shock’? If so, how did you get through that?
Yes, I experienced culture shock during a visit to a Japanese hot spring onsen. I was a little hesitant to go in but since I had paid for the hotel at Naha, I didn’t want to regret not going. Most of the women there were accompanied by their female family members or friends while I was alone. What I was most nervous about was breaking any rules or practices, but when I looked around, I was relieved to read (the rules) on signs posted in English. After that, I was pretty comfortable. I was quite proud of enjoying this unique way of pampering myself.

How did you feel when you first arrived in Japan? How did you feel when you left Japan?
I was worried if we would be treated differently or that Japanese people would isolate themselves from us since we didn’t speak their language. But, when we arrived, the Japanese people would amiably greet us by saying, “Irashaimase” (welcome). Every day I learned something new and noticed my personality change due to the people I shared my time with. They spoke softly, and I learned to naturally speak softly too. The people cared for others, and I eventually treated everyone as they did. Their customs became our new way of life and I could feel the difference as I wasn’t stressed or agitated anymore. I cried when I left my friends and co-workers in Okinawa, and I miss them dearly. However, I still keep in touch with them through Facebook. After my family and I left the land of Rising Sun, we could feel the tension. It was shocking to leave Japan. 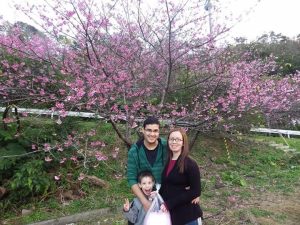 What are your future plans?
My future plans are to earn my bachelor’s degree in teaching English and join the JET program once I retire from the military. In addition, I plan to learn to speak, read, and write Japanese and take the Japanese Language Proficiency Test (JLPT) .

Would you like to return to Japan?
Yes, I would certainly return in the future to Japan and earn a work visa and have my youngest son revisit his birthplace in Okinawa, Japan.

What challenges have you faced in trying to stay connected to Japan/Japanese culture from the United States?
One of the challenges of staying connected to Japan is practicing Japanese, since I don’t have any Japanese native speakers around me. If you don’t use it, you lose it. However, I have continued to practice and study on my own.