As part of JUMP’s ongoing initiative to reach out to those who have served or lived in Japan, JUMP intern Tyler Burton interviewed Charlotte Slaney Lewis, daughter of Captain Lesley Calhoun, who lived in Otsu, Shiga Prefecture from 1949-1951. Following her stay in Japan, Slaney Lewis’ family was sent to Fort Riley, Kansas, and then to Fairbanks, Alaska.

1. How did you find out about JUMP? What prompted you to join?
I was planning a trip back to Japan and researching on the internet for info on Otsu. It was during this time that I ran across information about JUMP.

2. What did you enjoy most about living in Japan?
I was 12 years old when we (my mother, brother, and I) were shipped to Yokohama to join my father, Captain Lesley Calhoun. He would have been a Sergeant then. I loved every moment of living there and would like to meet others that lived there too. I also loved our two maids that took care of us. I was a twelve-year-old young girl, interested in about everything! The people were kind and very interested in my blond hair! 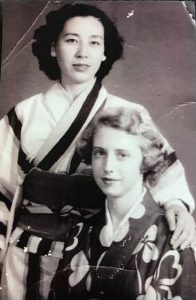 Slaney Lewis and one of her maids

3. Did you become friends with many locals? How did you meet them?
My two maids were my favorite people and everyone I met was always very nice to me. I attended an American school in Kyoto. I took a bus there every day and it took a while to get there, so I didn’t have much free time at home. I do remember dancing around a camp fire with some Japanese girls, though.
I attended the military church in Otsu and my best friend was Carolyn, the daughter of the minister. I have lost touch with her and would love to see her.

4. Have you been back to Japan since 1951? If so, how does your impression of Japan now differ from that of Japan at that time?
I was thinking of going back for to visit but I decided not to go after finding all the high rises, and it looked like it had changed a great deal. I am very sorry now that I didn’t go! 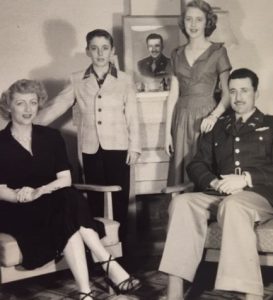 The Calhoun family. Slaney Lewis is second from right.

6. Could you tell us a bit about your father’s military service? What did your mother do in Japan?
My mother worked as a volunteer at the military hospital during that time. My father was stationed at Camp Otsu as an Army Sergeant in the 25th Infantry Division, 27th Infantry Regiment. He was an excellent Army man and was very happy with his jobs. While we lived in Japan, my father went to Korea to fight when that war broke out. However, he was wounded in Korea and suffered a bad knee for years. He was promoted to Lieutenant after the war, and later became a Captain before retiring at the end of the 1950s.

7. Any advice for individuals/families that will be stationed in Japan?
I would just say to relax and enjoy every minute. And be sure to travel to Nara: it is beautiful. Also visit the mountains around Otsu. My brother and I used to hike up there and camp out overnight.