Service members climb aboard for JUMP event on USS Iowa 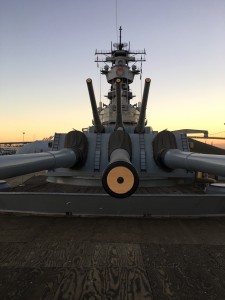 The USS Iowa gained a a new crew of past and present United States and Japanese service members on November 19 when JUMP held its inaugural Los Angeles event aboard the retired battleship museum.

The JUMP (Japan-U.S. Military Program) event, hosted by the Japan America Society of Southern California with support from Sasakawa Peace Foundation USA and the Consulate-General of Japan in Los Angeles, brought together those with the shared experience of having served in Japan for a social night of building new relationships.

The event began as the sun set with a tour of the battleship, which served as the flagship of American Pacific forces in World War II. Soon after, drum beats filled the air as taiko drummers signaled the start of a forum featuring speakers representing both countries.

Admiral Dennis C. Blair said the friendly and mutually beneficial relationship between the United States and Japan is a strong foundation for maintaining peace and security in East Asia.

“It really is the key to doing what we need to do out there,” he said.

Deputy Consul General Izuru Shimmura remarked hosting the event on board the USS Iowa served as a reminder of how far the relationship between the two countries has come in the 70 years since the end of the war. Now, he said, it’s “one of the best friendships between nations.”

“The bond between the U.S. Navy and Japanese Maritime Self-Defense Force is vital for the security” of Asia, he said.