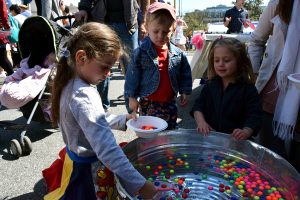 The festival is the largest one-day celebration of Japanese culture in the U.S. — and the JUMP team, representing the strength of the U.S.-Japan alliance, was part of this year’s celebrations. Each year, the event includes vibrant performances, martial arts demonstrations, music, cultural groups, arts vendors, and plenty of food. JUMP’s booth was located in the Education section of the festival, aiming to connect past and present service members, families, and government civilians who have served in Japan.

We’d like to extend a big and heartfelt welcome to all our new members who found us at the festival and signed up to join the network! We’ll have more news on upcoming events to share soon!