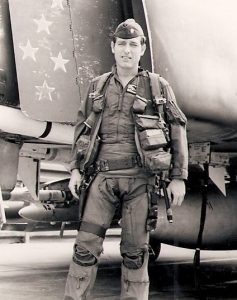 Cosentino preparing for a mission at Udorn Air Base in Thailand during December 1972.

As part of JUMP’s ongoing initiative to reach out to those who have served or lived in Japan, JUMP Program Assistant Troy Robinson interviewed and edited a story submitted by Cornelius “Neil” Cosentino, a retired Air Force fighter pilot who served in the 67th Tactical Fighter Squadron at Misawa Air Base in the late 1960s.

His story recalls the process of building his home off base in Misawa in the late 1960s. Following his time in Japan, Cosentino served as a fighter pilot during the Vietnam War and later retired from the 62nd Tactical Flight Squadron at MacDill Air Force Base in Tampa, Florida, in 1978. He has over 6,000 hours of flying time and over 760 hours in combat. He has been awarded the Distinguished Flying Cross, Joint Service Commendation Medal, and the Air Medal with nine Oak Leaf Clusters for flying in combat.

1. How did you find out about JUMP? What prompted you to join?
There was a JUMP event in Tampa last year at the Port Cruise Terminal. We were invited to attend by the Consulate-General of Japan in Miami.

2. What did you enjoy most about living in Misawa?
Flying around Japan made me a quick study of the Japanese landscape, but I really enjoyed learning more about Japanese culture and cinema.

3. Did you become friends with many locals? How did you meet them?
Our home was located on the beach, and we had many neighbors that were very kind to my wife and I. Maria made many more connections with the locals than I did as I was often flying or on temporary duty assignments in Korea or other parts of Japan. I would have liked to meet Japanese pilots but there was no way to mix back in my day. From what I understand, Misawa is now a joint base.

4. Have you been back to Japan since you lived there?
No, we have never had the opportunity to return. We plan to go back someday soon.

5. Tell us about a cultural difference that took some time to get used to.
Japan in 1969 was a completely foreign environment for my wife and I. Everything from driving to signage was different and took some time to get used to. Even things as mundane as tatami mat hotels, but we learned to enjoy all of it. One of the most interesting shocks to me was a very large museum in Tokyo that was devoted entirely to calligraphy. I found it beautiful, but I would have liked to dive deeper and understand that art more.

6. Any advice for individuals/families that will be stationed in Japan?
Honestly, if you are going to be stationed in Japan you should try to find resources from those who have previously lived there. Join JUMP because they can help educate you about what to expect before you go. Perhaps it is a little different than it was in the 1960s or 1970s but using these resources can help you plan tours or choose vacation destinations. They can also help you engage in local events and get to know the local customs.

I hope you enjoy this story. There are many more good ones, but this is one of my best stories about Japan. It is one I always enjoying telling about my tour of duty with the 67th Tactical Fighter Squadron at Misawa Air Base.

It was a welcome surprise then that my first assignment as a fighter pilot out of my Replacement Training Unit was to Misawa Air Base. Flying the F-4 Phantom in Japan and deploying and flying in Korea was a super assignment, with great flying missions and many interesting episodes. There are many other stories I am compiling into a book, like my temporary assignment to Fuchu where I watched the first moon landing sitting on tatami mats in our off-base Japanese apartment. We watched the video on Japanese TV but listened in English on AFN Radio.

The story I would like to share is why and how I designed and had a house built east of Misawa Air Base overlooking the beach and the Pacific Ocean.

I arrived in Misawa by train just after an earthquake. My wife was in California waiting for me to find quarters but there were none due the earthquake. For her to join me we would have to find a place in the town of Misawa which had a very limited selection of homes due to the earthquake damage. For her to come, I had to find another solution, and this is where my story starts.

I asked about building a house and was told that I could but would have to lease the land first. I located Charlie Uno, a contractor who spoke good English. He told me to find a site and he would make the arrangements to lease the property and start building. I gave him a few, rough hand-drawings of the house and garage and we signed an agreement on a price.

My roommate in the Bachelor Officer Quarters was the Air Base Air Rescue helicopter pilot. I recruited him, riding in the helicopter on his proficiency flying missions looking for a building site. The challenge was to find a site that was a reasonable distance from Misawa Air Base. The site had to have nearby electric power, water, and a paved highway. The best locations were east of the air base along the north-south beach road.

It took time but after several flights we located a very large open field that was not being farmed. We started looking for a large rock so that I could mark the location where the house would be built. I guess I could have used a wooden stake, but it appeared to me a good idea to use a large stone. We took a plywood sheet with us and wooden poles. We finally found a large stone and loaded it on the helicopter and flew to the building sight.

My contractor was able to get a lease from the owner, a nearby farmer who had a reed-roof house about 300 yards to the south toward Hachinohe. A passer-by who saw that lone large rock in the middle of field could wonder how and why it got there. I drove out to the site with the contractor and showed him the rock—the spot where he would build our home. 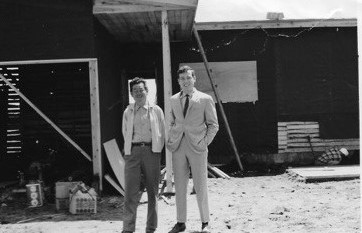 The house was built on concrete pedestals–footings using a post and beam system to absorb earthquake movement. There were many other aspects but one of the most memorable observations was when the truck full of wood arrived for the construction and the carpenter went to work. I noted that no two pieces of wood on the truck were the same in species, length, width, or thickness. Also interesting to me was the pull saw he used. It seemed so smart and efficient with one side for cross cutting teeth and the other for rip cutting teeth.

The house was completed in a very short time, but we had a small problem with the bathroom. When I asked to see the architectural drawings to see if they match our drawings, he smiled at me, saying the house was built using our drafts. How cool was that!? We moved in and the first thing we did was buy an Akita puppy—one of the best dogs in the world. We enjoyed living on the beach in our happily-ever-after-house in Japan.

My only regret about my tour of duty in Japan was that it was way too short. That is our story. I hope you enjoy it and we hope to revisit Japan and Misawa soon to enjoy the country and culture again. And to see if our beach house in still there after all this time.”