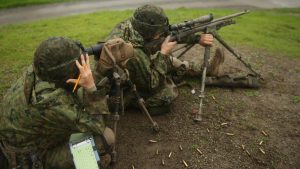 Ambassador James Zumwalt, CEO of Sasakawa USA, former U.S. ambassador to Senegal and Guinea-Bissau, and native of San Diego, was highlighted in a recent San Diego Union-Tribune article while participating in JUMP’s Marine Corps Recruit Depot Breakfast Reception event in San Diego. At the event, Ambassador Zumwalt greeted 200 Japanese Maritime Self Defense Force recruits, on a ship visit to San Diego, with a talk on the U.S.-Japan alliance.

“All these young officers will have the experience of coming to San Diego and seeing that America is a pretty nice place,” Zumwalt told reporter Carl Prine. “That has a benefit down the road when they’re off on a destroyer somewhere exercising with us.”

Describing JUMP, the article mentions JUMP activities throughout the U.S., such as last year’s Padres game with U.S. and Japanese SDF service members and JUMP’s annual visits to Pensacola, Florida. For a full list of our past events, click here.

Through social networks and events, JUMP builds relationships and provides opportunities for service members to engage with each other. JUMP provides a powerful foundation for sustaining the solid alliance and relationship that exists between the U.S. and Japan.

Click here to read the full article, published in the San Diego Union-Tribune on June 16, 2017.