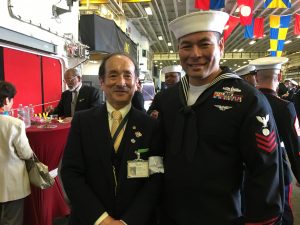 As part of JUMP’s ongoing initiative to reach out to those who have served in Japan, JUMP intern Nina Udagawa interviewed Yuji Toda, who served six years in the JMSDF (Japan Maritime Self-Defense Force) and is currently in the U.S. Navy.

How did you find out about JUMP? What prompted you to join?
I wanted to join some kind of Japanese organizations to expand my Japanese heritage network. So, I researched on the internet and found this program that I thought was interesting. Because the scope of JUMP is to bring Japan and the U.S. closer together, I thought my experience would be very suitable since I have experienced both the JMSDF and U.S. Navy.

What compelled you to join the U.S. Navy given your JMSDF (Japan Maritime Self-Defense Force) experience?

I met my wife when I was Sasebo, Japan, as JMSDF and she brought me to the U.S. Then I joined the U.S. Navy because I wanted to travel the world again and obtain the benefits the U.S. Navy offers, like health and education.

Describe one of the most memorable experiences you had while in the Navy?
Every time we have a joint exercise with JMSDF or have Japanese distinct visitors come onboard our ship, I get picked up for translator. I feel like I’m contributing to bringing the Japan and U.S. relationship closer together. Also, I had an opportunity to work with the U.S. Navy Seals and JMSDF Special Boarding Unit for the 2019 bilateral exercise [Iron Fist] as a translator. It was a very interesting experience. 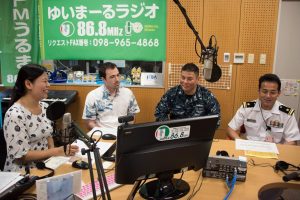 What kinds of activities do you recommend to someone new to Japan?
Climbing Mount Fuji is a must (which I have never done.) Visit Japanese convenience stores. Try to talk to local people in Japanese as much as you can. They will try to talk to you using English, as much as they know.

Do you have advice for individuals/families getting ready to be stationed in Japan?

Go out there and explore Japan rather than staying on base. Japan has a unique culture.

Seeing that you have a lot of experience moving, how do you adjust when moving to a new location?
Talk to local people and become friends. That makes the new place fun and lovable.

I am assuming you have been exposed to many cultures both in your personal and professional life; do you have any advice on how to network and form friendships/relationships with others across cultures?
Communication is key. Even if they can’t speak English, you can use gestures. Show that you have an interest in their culture and people.

How do you view the future of the U.S.-Japan relationship?
The U.S. and Japan rely on each other like brothers. To have this relationship last long, we need to interact more with one another. To do so, our bond is getting stronger than ever. 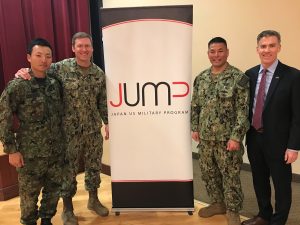