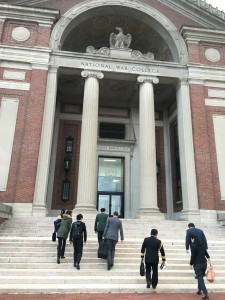 JUMP (The Japan-U.S. Military Program) seeks to connect and bring together service members, families and government civilians who have served in Japan. This event, held at the National War College in Washington, D.C., went a step further by also drawing in those who have yet to serve in Japan.

Attendees included students and faculty of the National War College, NWC alumni and members of the Japan-America Society of Washington, D.C. At the event, up-and-coming U.S. Military officers mingled with senior officers and diplomats until long after the panel discussion had concluded.

In introductory remarks, Masato Otaka, Minister of Public Affairs with the Embassy of Japan in D.C., said all those in attendance could be future “goodwill ambassadors” for the country.

“We want to reach out to people who are back in the states… who might be interested in connecting with Japan,” he said of the JUMP program, adding it has grown considerably in the past two years under the leadership of Sasakawa USA. 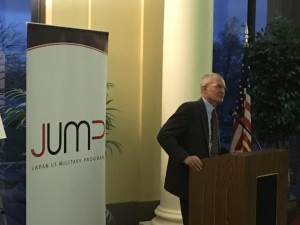 Admiral Dennis Blair, Sasakawa USA’s Chairman and CEO, said Japan is a strong economic partner to the U.S. in Asia, a region that is growing in its influence.

He advised all in attendance to take notice of Japan’s recent changes to its Collective Self-Defense policy, telling students preparing to embark on trips to Asia that issue is “something that needs to be in your mind.”

James Kendall, Sasakawa USA’s Fellow for Common Challenges who spearheads JUMP, said he is looking forward to employing the program as a conduit for strengthening relations between the United States and Japan, as well as bringing together those who have a shared experience that they wish to continue.

“This is such a great way for people to further develop their relationship with Japan even after they have returned stateside,” he said. “This event at the National War College definitely achieved that by educating those who attended on current issues that are relevant to that relationship, while also providing a venue to network and simply socialize with others who also have that shared interest.”