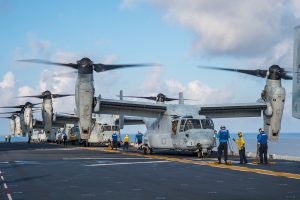 The U.S. military in Japan resumed use of its Osprey planes Monday in Okinawa, sparking sharp local reaction over a move that came less than a week after one of the tilt-rotor transport aircraft made a crash-landing off the southern Japan island prefecture.

The entire fleet of MV-22 aircraft in the prefecture had been grounded following the incident on Tuesday evening, in which two of the five crew members were injured and the aircraft broke apart.

The U.S. military reiterated its position that the accident, which occurred during aerial refueling training, was not caused by any problem with the aircraft itself… Read more here.