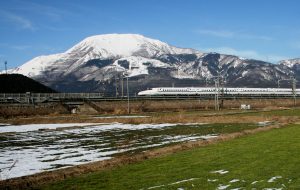 “Tokyo Station Track 15, all aboard for Vladivostok, Khabarovsk and Moscow!”

The media is full of speculation that Japan and the Russian Republic may reach accord over territorial issues that have persisted since the end of World War II, and in so doing, enjoy considerably cozier relations than at present.

How cozy? Well Shukan Jitsuwa (Oct 27) reports that if the two countries see eye-to-eye, the world’s longest railway, the 9,297-long Trans-Siberian, might someday be extended by bridge across the 7-kilometer wide Strait of Tartary (also known as the Mamiya Strait) from the Asian mainland to Sakhalin and eventually, via a 42-kilometer-long bridge or undersea tunnel to Wakkanai in Hokkaido… Read more here.