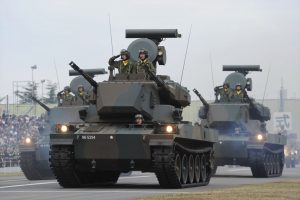 Japan’s defense budget in fiscal 2017 could hit a record high of around 5.1 trillion yen ($44.64 billion), a government source said Thursday, as the country seeks to cope with security challenges amid China’s maritime assertiveness and North Korea’s missile threats.

It would mark the fifth straight year of increases in the country’s defense budget, which also includes costs linked to the realignment of U.S. forces in Japan. Defense spending has been on an uptrend since the fiscal 2013 budget compiled under Prime Minister Shinzo Abe who returned to power in December 2012… Read more here.