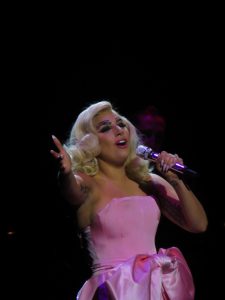 Sometimes, translation is an exact science. The Japanese word “ringo,” for example, becomes “apple” in English, and there’s really no room for debate on the matter.

So one can appreciate that the translators working for Japanese broadcaster Nippon Television’s news every. program were faced with a challenge regarding a report, which aired on November 9, about protests in the U.S. following the election of Donald Trump. A segment of the report featured footage of musician Lady Gaga holding up a sign bearing the words “Love trumps hate,” a popular rallying cry of the anti-Trump camp… Read more here.