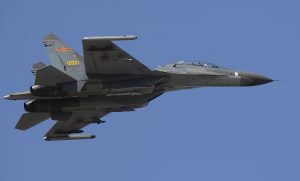 Japan said on Monday it had protested strongly against China’s allegations its fighter jets had engaged in “dangerous and unprofessional” behavior when they scrambled at the weekend as Chinese aircraft flew between Okinawa and Miyako islands.

Chinese military aircraft flew over waterways near self-ruled Taiwan – seen by Beijing as a renegade province – on Saturday as part of long-range exercises, Taiwan said.