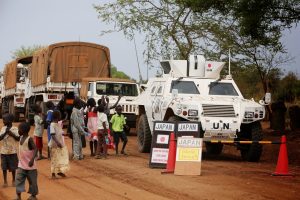 Japan on Tuesday approved a plan for its troops in South Sudan on U.N. peacekeeping operations to conduct rescue missions, amid critics’ concerns the move risks embroiling Japanese soldiers in their first overseas fighting since World War Two.

The new mandate, which will apply to troops to be dispatched to South Sudan from Nov 20, is in line with security legislation enacted last year to expand the overseas role of Japan’s Self-Defense Forces (SDF), as the military is known.

“South Sudan cannot assure its peace and stability on its own and for that very reason, a U.N. peacekeeping operation is being conducted,” Prime Minister Shinzo Abe told a parliamentary committee on Tuesday. “The SDF is carrying out activities that only it can do in a tough environment”… Read more here.