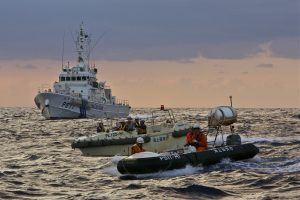 Japan’s Self-Defense Forces, coast guard and police have conducted their first joint drill to cope with an illegal entry of armed fishermen on a remote island, a government source said, amid tension with China over a group of islands in the East China Sea.

The exercise was held on an island in Kagoshima Prefecture on Friday as Chinese government vessels repeatedly entered Japan’s territorial waters around the Japanese controlled Senkaku Islands, claimed by China which calls them Diaoyu, in Okinawa Prefecture south of Kagoshima, with the Japan Coast Guard reporting the latest breach Saturday.

The source said the drill, aimed at increasing the coordination and capability of the police, the coast guard and SDF, did not assume any specific country or place… Read more here.