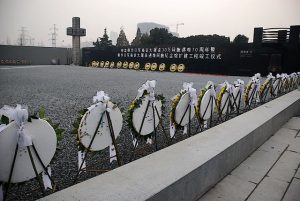 China says it too has places that Japanese political leaders should visit to pay tribute to war victims, in response to Prime Minister Shinzo Abe’s plan to go to Pearl Harbor for that expressed purpose later this month.

“If Japan wants to deeply reflect upon (its wartime actions) and genuinely apologize (for them)…China has many places where they can visit and ponder on the past,” Foreign Ministry spokesman Lu Kang told a press briefing Wednesday, citing the Memorial Hall of the Victims in Nanjing Massacre as one of them.

“Just as American people do not forget the Pearl Harbor incident, Chinese people also cannot forget…our compatriots who died in the massacre in Nanjing,” he said… Read more here.