Abe, Trump to meet again in U.S. around January 27: sources 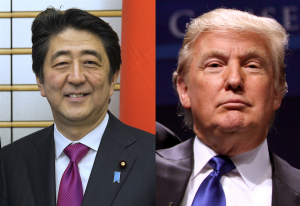 Abe was the first foreign leader to hold face-to-face talks with Trump following the U.S. presidential election in early November.

A meeting so soon after the inauguration is expected to offer Abe a chance to appeal to both domestic and overseas audiences about the strength of the Japan-U.S. alliance, placating concerns about Trump’s comments on the campaign trail that suggested Japan and other allies are not doing enough in exchange for U.S. military support, the sources said… Read more here.