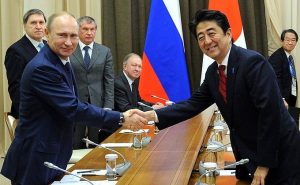 Japanese Prime Minister Shinzo Abe and Russian President Vladimir Putin wrapped up two days of talks on Thursday, with numerous economic deals but no big breakthrough on a territorial row that has over-shadowed ties since World War Two.

Putin was heading home with promises of economic cooperation after appearing to achieve what experts said was a key objective – easing international isolation when Russia faces Western condemnation over the destruction of eastern Aleppo in Syria, where it is backing President Bashar al-Assad’s forces.

Abe and Putin agreed to launch talks on joint economic activities on disputed islands at the center of the territorial row as a step toward concluding a peace treaty formally ending World War Two, the two sides said in a joint statement… Read more here.