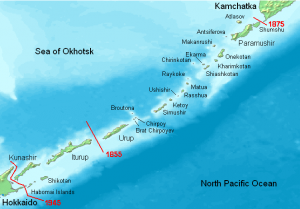 Japanese Prime Minister Shinzo Abe said on Friday Russia’s deployment of missile systems on islands in the western Pacific isles that are also claimed by Tokyo was “regrettable”.

His comments came less than a month before Russian President Vladimir Putin is to visit Japan for talks aimed at progress on the decades-old territorial row. Moscow has already said it hoped the deployment would not damage efforts to settle the dispute… Read more here.