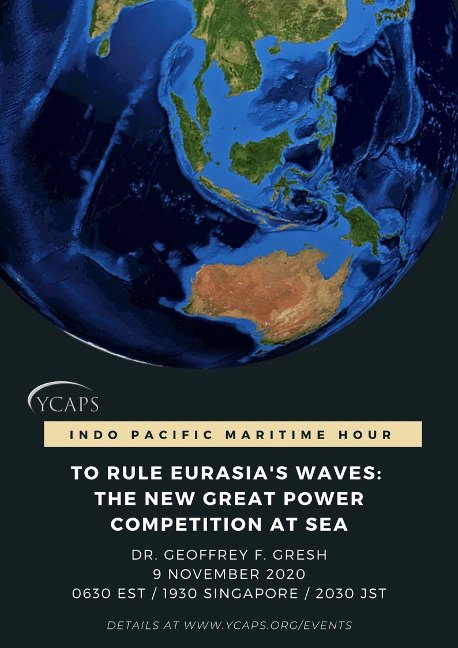 On November 9, 2020, JUMP and the Yokosuka Council on Asia-Pacific Studies (YCAPS) hosted our fifteenth YCAPS-JUMP webinar at 8:30 PM JST. This was part of an ongoing series exploring interesting and contemporary topics relevant to our base communities and beyond. Over 50 members listened to our guest speaker, Dr. Geoffrey Gresh, who spoke about his new book which considers how the melting of the Arctic ice cap will create new shipping lanes and exacerbate a contest for the control of Arctic natural resources. Dr. Gresh also explored the strategic maritime shifts underway from Europe to the Indian Ocean and Pacific Asia.

Eurasia’s emerging powers—India, China, and Russia—have increasingly embraced their maritime geographies as they have expanded and strengthened their economies, military capabilities, and global influence. Maritime Eurasia, a region that facilitates international commerce and contains some of the world’s most strategic maritime chokepoints, has already caused a shift in the global political economy and challenged the dominance of the Atlantic world and the United States. Dr. Gresh said that he believes climate change is set to further affect global politics.

Geoffrey F. Gresh is Professor of International Relations at the College of International Security Affairs (CISA), National Defense University in Washington, D.C. with a primary research focus on maritime affairs. He has also served as the Department Chair of International Security Studies and as CISA’s Director of the South and Central Asia Security Studies Program. Previously, he was a Visiting Fellow at Sciences Po in Paris and was the recipient of a Dwight D. Eisenhower/Clifford Roberts Fellowship. He also received a U.S. Fulbright-Hays Grant to teach international relations at Salahaddin University in Erbil, Iraq. He has been awarded a Rotary Ambassadorial Scholarship to Istanbul, Turkey and a Presidential Scholarship at the American University in Cairo, Egypt. Most recently, he was named as a Hitachi-CFR International Affairs Fellow, a U.S.-Japan Foundation Leadership Fellow, an Associate Member of the Corbett Centre for Maritime Policy Studies at King’s College in London, and as a term member to the Council on Foreign Relations. He is the author of “Gulf Security and the U.S. Military: Regime Survival and the Politics of Basing” (Stanford University Press, 2015), editor of “Eurasia’s Maritime Rise and Global Security: From the Indian Ocean to Pacific Asia and the Arctic” (Palgrave, 2018) and co-editor of “U.S. Foreign Policy in the Middle East: From American Missionaries to the Islamic State” (Routledge, 2018). His most recent book is “To Rule Eurasia’s Waves: The New Great Power Competition at Sea” (Yale University Press, 2020). His research has also appeared in other reputable peer-reviewed journals and policy-relevant outlets. He received a Ph.D. in International Relations and MALD from The Fletcher School of Law and Diplomacy at Tufts University.