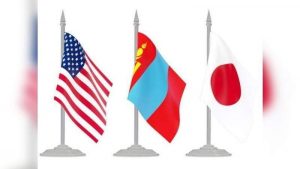 On October 1, JUMP and the Yokosuka Council on Asia-Pacific Studies (YCAPS) hosted our tenth YCAPS-JUMP webinar at 7 PM JST. Over 40 participants attended the webinar where a panel of experts from Mongolia, Japan, and the United States discussed the wide array of potential cooperation opportunities for these three countries. The panelists reviewed the history and significance of the 2020 Mongolia-Japan-US Trilateral Meeting held in January 2020 while examining strengths and new opportunities for collaboration between these strategic partnerships. They also discussed regional development initiatives, economic investment and community relations programs that can contribute to more prosperous and rewarding relationships.

Otgonbaatar led the panel with a broad overview of political engagement venues, specifically addressing the tri-lateral discussions that began nearly a decade ago. After hearing from Otgonbaatar, Lt. Col. Luu addressed current initiatives and programs being implemented in Mongolia, through the assistance of USAID and DOD components. Following Lt. Col. Luu, Lt. Col. Higashiya discussed Japanese-Mongolian relations through peacekeeping operations and military training, specifically in medical skillsets and engineering. Following the panelists, participants asked a wide array of questions, ranging from how people and governments are responding to China’s educational policy in Inner Mongolia, to investment opportunities, to COVID-19 integration. The multitude and specificity of the questions indicated this topic was timely and deserving of attention again in the future.

Lt. Col. TC Philip Luu is currently serving as the US Defense Attaché (DATT) in Ulaanbaatar, Mongolia. He graduated from the United States Military Academy (USMA) in 2000 and served as an Armor and Armored Cavalry officer for nine years, deploying numerous times in support of Operations Desert Spring and Iraqi Freedom. He earned a Master’s Degree in East Asian Security Studies from the Naval Postgraduate School (NPS) in 2012, before serving as a US Army China Foreign Area Officer (FAO) in Beijing and Washington DC. LTC Luu is married and has 2 daughters. He can speak Chinese, Vietnamese, Spanish and is currently studying Mongolian.

Lt. Col. Higashiya Keiichi is currently serving as the Japanese Defense Attaché (DATT) in Ulaanbaatar, Mongolia. He graduated from the National Defense Academy (NDA) in 2000 and served as an Artillery officer for nine years and an Intelligence officer for ten years. He earned a Master’s Degree in International Security Studies from the NDA Graduate School in 2012. He can speak English and is currently studying Mongolian.

Otgonbaatar Byambaa is currently serving as a diplomat and second secretary (political affairs) in the Mongolian Embassy to Tokyo, Japan. He graduated from the School of Foreign Service of the National University of Mongolia (NUM) in 2008 and earned a Master’s Degree in International Relations from the International University of Japan (IUJ) in 2010. He has been studying China’s foreign policy decisions in the energy sector with particular interest on its trans-border pipelines. Currently he is a Ph.D. candidate at Waseda University. Otgonbaatar is married, has a son, and can speak Japanese, Chinese and English.