Location: This was an online webinar through Zoom. 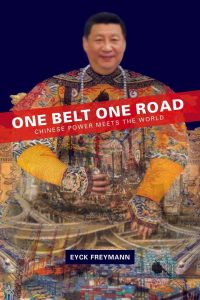 On November 18, 2020, JUMP and the Yokosuka Council on Asia-Pacific Studies (YCAPS) hosted our sixteenth YCAPS-JUMP webinar at 4 PM JST. This was part of an ongoing series exploring interesting and contemporary topics relevant to our base communities and beyond. Our featured speaker was Eyck Freymann whose new book, “One Belt One Road: Chinese Power Meets the World” has just been published by Harvard University Press.

From Sri Lanka to the shipyards of Greece, Eyck Freymann took participants inside China’s One Belt One Road initiative. He argued that the initiative is not a centralized and systematic policy. Rather, he believes it is a largely aspirational and sometimes ad hoc campaign to export an ancient Chinese model of patronage and tribute.
Inside China, propaganda depicts President Xi restoring the nation’s lost imperial glory. Overseas, China uses massive investments to cultivate relationships with local politicians and political parties. The strategy is working. Drawing on primary documents in five languages, numerous interviews, and on-the-ground case studies, Freymann explained that China is more often successfully attracting willing partners than preying on victims.

Eyck Freymann is a DPhil candidate in China Studies at the University of Oxford. He has worked as a research assistant to Graham Allison at Harvard, to Niall Ferguson at the Hoover Institution, to Paul Haenle at the Carnegie Endowment for International Peace; and to Shi Zhiqin at Tsinghua University. He holds an MPhil from the University of Cambridge, where he was a Henry Scholar; an AM in Asian Studies from Harvard, where he won the Joseph Fletcher Memorial Prize for the top thesis on Asia; and an AB in East Asian History with highest honors, also from Harvard.