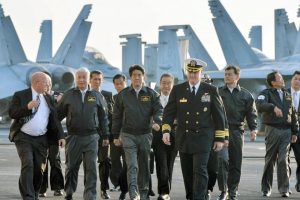 On October 21, 2020 JUMP and the Yokosuka Council on Asia-Pacific Studies (YCAPS) hosted our twelfth YCAPS-JUMP webinar at 7:30 PM JST. This was part of an ongoing series exploring interesting and contemporary topics relevant to our base communities and beyond. Our featured guest was Tobias Harris, author of The Iconoclast: Shinzo Abe and the New Japan.

Moderated by Vice President Caitlin Doornbos of YCAPS, the session began with Harris discussing the personal life of Abe, his relations to the world of politics, and how it all intertwined with his entrance into the political fray and initial rise to the premiership. With roughly 40 participants attending the online event, Harris dug deeper into Abe’s reemergence in 2012 and the direction Japanese policy took under his second tenure until his resignation earlier this year. After the initial segment, questions from the audience were taken and discussed. Though most of the event dealt with Japan’s security policies under Abe, Harris also took note of the economic foreign policies and relations between Japan and neighboring countries both in North and South East Asia. The event gave great insight into the life of now-former Prime Minister Abe, including both his successes and failures, while also driving the discussion towards the post-Abe discourse now with the Suga administration.

Tobias S. Harris is a leading expert on Japanese politics, widely quoted in leading world publications and a regular guest on television and radio programs. After working on the staff of a Japanese legislator from 2006 to 2007, he ran the popular blog “Observing Japan,” contributed to the Wall Street Journal Asia and Far Eastern Economic Review, and conducted graduate research at MIT and the University of Tokyo. Since 2013, he has been the Japan analyst at Teneo Intelligence, the political risk division of Teneo, a leading CEO advisory firm. He was Economy, Trade, and Business Fellow at the Sasakawa Peace Foundation USA, a Washington, DC-based think tank focused on U.S.-Japan relations, from 2014 to 2020. He was born in Chicago and currently lives in Bethesda, Maryland with his wife, their two sons and their two cats. He has an M.Phil in International Relations from the University of Cambridge and a BA in Politics and History from Brandeis University.