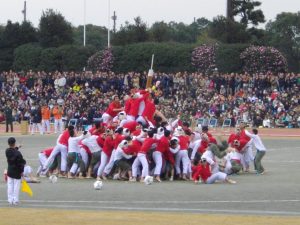 On November 11, 2018, the Japanese National Defense Academy (NDA) celebrated its annual festival. NDA graciously invited a limited number of YCAPS members and associates to join them for VIP seats for this event. Cadets personally guided Yokosuka Council on Asia-Pacific Studies (YCAPS) and JUMP members. The cadets practiced their English by explaining their events, school, and experiences in the NDA.

To highlight NDA’s year, this festival included a parade by the cadets and displays of military equipment. The final event was a Bo-taoshi: a game often played by the NDA which pits a field of cadets in combat with each other to lower the opposing team’s large pole. The festival is normally attended by a range of VIP members including the Defense Minister and Service Chiefs. This opportunity represented a new level of partnership between YCAPS and the NDA.

The NDA is a military academy which educates and trains future leaders of three Japan Self-Defense Forces. Located near Yokosuka’s Kannonzaki point, the NDA has been training cadets since 1952. Learn more at: http://www.mod.go.jp/nda/english/

The event was free of charge.

When: Participants with access to the U.S. base in Yokosuka met at Purdy Gym at 0900 for bus transport to JDA. For those without access to the base, alternate arrangements were made. The last event was at 1700.

This event was open to the public, but YCAPS members were given cadet escorts and access to the VIP seats.

This event was co-sponsored by JUMP.