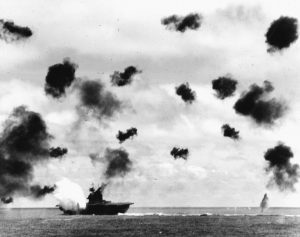 From June 4-7, 1942, the Imperial Japanese Navy and U.S. Navy fought the Battle of Midway, a critical inflection point in the Pacific War after which the United States seized the initiative in the Pacific War. In most histories written in the English, the U.S. victory can be attributed to superior intelligence, tactics, and, perhaps, luck. On this 76th anniversary of this battle, VADM Yoji Koda told this history from a Japanese perceptive based on his original research involving Imperial Japanese Navy records and the lessons that the Japan Maritime Self Defense Force (JMSDF) has incorporated into their training and doctrine.

This event was part of the Yokosuka Council on Asia-Pacific Studies-JUMP seminar series and was also co-sponsored by Temple University Japan’s Institute of Contemporary Asian Studies.