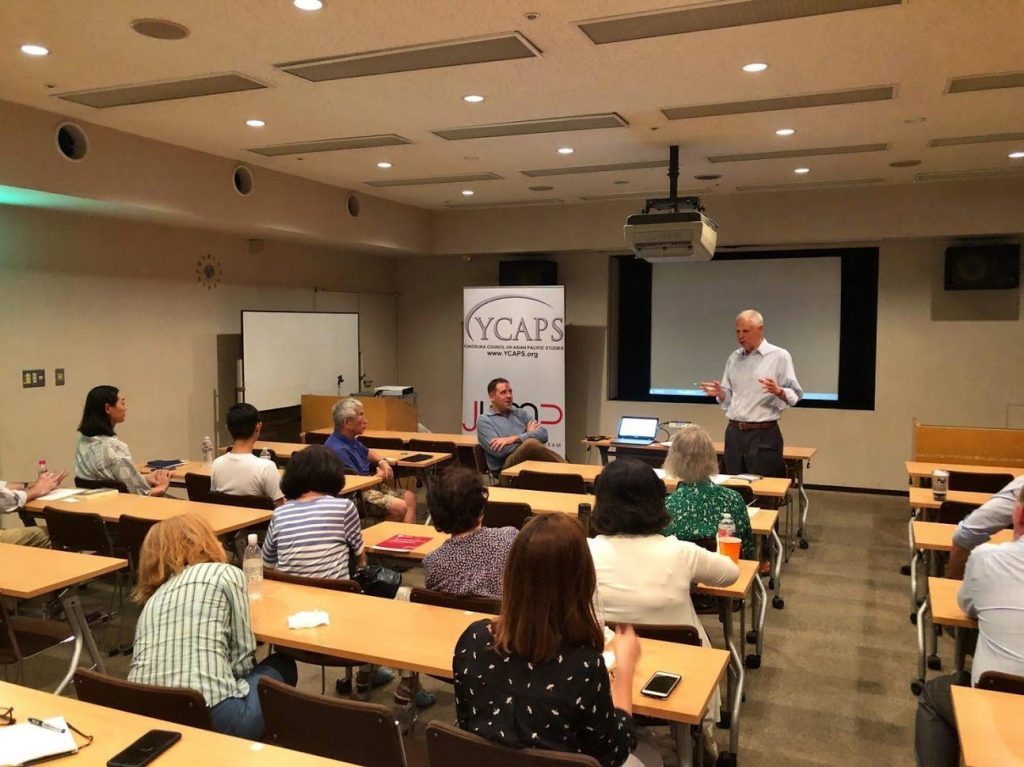 Leland Gaskins speaks to our YCAPS members about cross-cultural understanding. (Courtesy of YCAPS)

Yokosuka Council on Asia-Pacific Studies (YCAPS) President John Bradford welcomed Leland Gaskins, author of Step Up: Overcoming Cross-Cultural Differences between Western and Japanese Businesspeople, to a receptive audience of YCAPS members on August 29, 2019. Mr. Gaskins’ new work synthesizes decades of experience in both Asia and the United States among Fortune 500 companies seeking to understand and thrive in the Asian economy. Gaskins related his experiences, first as an English teacher in Japan, followed by a diverse range of public and private sector positions, and how they inspired his effort to compile observations into a unique work that provides a leg up on cross-cultural understanding. His experience in product development, U.S.-Japanese economic relations, and immersion in Japanese culture have all informed this effort to unify two cultures into a highly productive organization; leveraging the best of both worlds.

Using a narrative style, Gaskins’ work resonated with the audience, as evidenced by the questions and scenarios raised. One audience member reflected on her own experiences and how horrified she felt when an inadvertent action must have appeared very rude (running to catch the last seat on a bus in the rain). Another audience member noted that as she builds an engineering firm from the ground up, she is cognizant of inherent differences between Japanese and Western engineers. While common themes are very useful, such as valuing the process over the outcome, Gaskins reminded the audience that these observations—which yielded useful themes—should not be thought of as inflexible stereotypes. “These are guiding prototypes which help us understand each other,” he continued. “If we are aware of these tendencies, we can prepare for them and avoid having misunderstandings turn into potential threats to productivity.”

The pre-seminar reception on the 6th floor of the Werk Yokosuka included sushi sponsored by the Japan-US Military Program (JUMP) and wings donated by Yokolicious.

Step Up: Overcoming Cross-Cultural Differences Between Japanese and Western Businesspeople is a simple story that contains practical solutions to recognize and overcome common cross-cultural problems. It brings a multi-disciplinary approach to address real world issues and help people succeed in globally connected careers. Gaskins reflected on his experience working in the Japanese business community and the process involved with developing this book. He shared applicable lessons for those engaged in intercultural relationships beyond the business sector.

The book is available for sale here.

About the Speaker: Leland Gaskins has lived and worked in Japan for more than twenty years. For ten of those years he served as principal Investment Representative in Asia for the State of North Carolina. In that role, he worked with numerous Japanese companies, assisting with their investments in U.S. operations. Prior to that, Gaskins was Senior Vice-President, Asia-Pacific, at Cognitive Arts Corporation, an industry leader in building high-impact experiential educational programs for universities, corporations, and government. In this role, he focused primarily on workforce learning and development priorities at major Japanese companies and Japanese subsidiaries of Western firms.

Gaskins has observed and discussed cross-cultural issues for many years. He long ago came to two conclusions. First, that most cross-cultural conflict between Japanese and Western business people is essentially the same few problems being repeated again and again. Second, that most of the cross-cultural training people have received has not been effective and there must be a better way. This has led him to focus in recent years on developing a deeper understanding of culture, cross-cultural conflict, and conflict resolution. Step Up brings together this research with his years of experience, his interest in innovative learning methods, and his desire to offer a better solution.

Step Up is the first of a planned series of books and educational materials devoted to this subject.