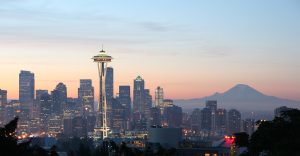 In coordination with the Japan-America Society of the State of Washington and the Nisei Veterans Committee, Sasakawa USA’s Japan-US Military Program (JUMP) hosted an event in Seattle, Washington on September 10, 2017 from 10 am to 2 pm. Attendees were able to take a tour of the NVC Memorial Hall and hear from Nisei veterans, as well as help welcome guests from the Japanese Self Defense Ground Forces and Joint Base Lewis McChord.

The event coincided with the annual U.S.-Japan Rising Thunder training exercises at the Yakima Training Center, and included a tour of the Nisei Veterans Committee Memorial Hall in Seattle, a luncheon, special guests and speakers, and taiko drumming.