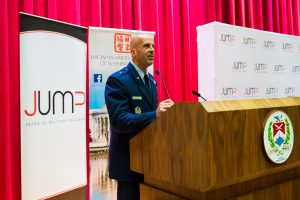 JUMP Reception at the National War College on November 16, 2017.
Photography by Joy Asico

Distinguished specialists on Japan, China, the Korean Peninsula, and U.S.-Northeast Asian relations discussed the persistent challenges that have and continue to impact the region at a special JUMP event held at the National War College on November 29. This was followed by dinner and a reception .

The National War College Alumni Association, founded in 1979, works to organize forums and seminars across the nation as it strives to helps its alumni grow their knowledge in military strategy and U.S. policy. The National War College Alumni Association is an active organization of graduates, faculty. and staff. The objectives of the Association are first, to foster continued interest in the work of the College, and second, to maintain and strengthen among the friendships and mutual understandings developed while attending the College.”

We’ve published a gallery of images from the event.