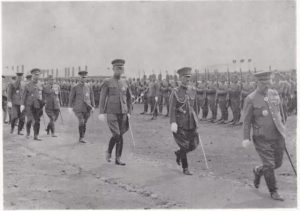 “In the nearly 80-year history of Japan’s ground forces, the only foreign armed forces that swore mutual defense, lived together, and died together with Japan’s army was the Manchukuo Army.” So says the Senshi sōsho, the official military history of Japan’s experience in the Second World War. But this claim, intriguing as it may be, does not quite tell the whole story. The Manchukuo Army, much like the colonial state it purported to defend from 1932 to 1945, was a contested and at times even paradoxical organization. Those who found themselves a part of it, either by choice or by coercion, brought with them uncertain motivations that frequently collapsed into open mutiny. Under the command of Japanese reservists, these Han Chinese, Korean, Mongol, Manchu, and White Russian troops were trained within a Manchukuoan ideology of “racial harmony,” even as their bodies were used to secure, expand, and defend Japan’s empire by fighting and killing their former countrymen. The national army of Manchukuo thus became a site where Japanese ideas of continental imperialism, racial leadership, and colonial control could be tested in the hot crucible of war.

In this Yokosuka Council on Asia-Pacific Studies-JUMP seminar on November 30, 2017, Ryan Schultz discussed the story of these Japanese officers and their colonial soldiers, emphasizing training and recruitment as well as military challenges in the army’s early years. He drew on organizational histories, orders, battle reports, combat and unit statistics, and memoirs to make his case.

• Ryan Schultz is a PhD candidate in Japanese history at The Ohio State University in the United States. He is currently conducting research as a visiting fellow at the Sophia University Institute for Comparative Culture as part of a U.S.-Fulbright Graduate Research Fellowship.