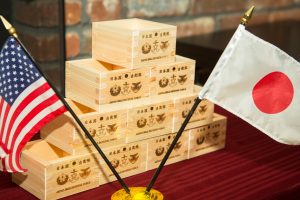 UPDATE: Due to ongoing public health concerns, we will no longer be holding this event. Our thanks to all who were planning to attend, and we hope to see you at more JUMP events in the future.

JUMP will be hosting our inaugural event in Norfolk, Virginia on Wednesday, March 18, 2020, at the Vista Point Center located on base at Naval Station Norfolk. This social hour will be from 6:00 PM to 7:30 PM and will feature a catered buffet dinner and open bar. JUMP Director CAPT Chris Rodeman (USN, Ret.) will deliver introductory remarks and the keynote speaker will be Rear Admiral Charles “Chip” Rock, Commander of Navy Region Mid-Atlantic.

JUMP seeks to bring together those American service members, government employees, and their families who have served in Japan and would like to remain in contact with Japanese culture, language, and people, as well as stay informed about the U.S.-Japan Alliance. The program is a collaboration between Sasakawa Peace Foundation USA, the National Association of Japan America Societies (NAJAS), and the Embassy of Japan in Washington, D.C.

If you have questions, please email our JUMP Director at crodeman@spfusa.org. 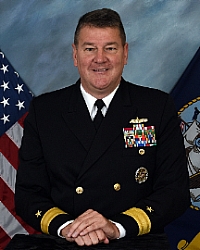 Rear Admiral Charles W. Rock is a native of upstate New York. He was commissioned in 1987 through the Naval Reserve Officer Training Corps Program at Texas A&M University, where he received a Bachelor of Science in Ocean Engineering. Rock holds a Master of Arts in National Security Strategy from the National War College.

Rock assumed command of the Navy’s Mid-Atlantic Region on July 20, 2018.