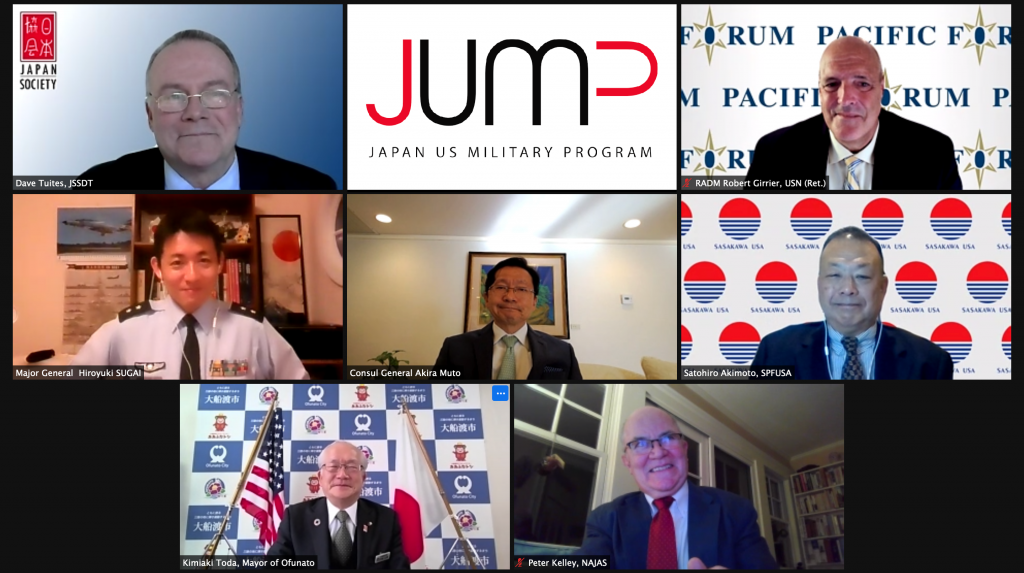 On March 11, 2021, the Japan-U.S. Military Program (JUMP) hosted a special virtual event via Zoom to celebrate our service members and the U.S.-Japan relationship with the Japan Society of San Diego and Tijuana. 48 JUMP members joined this special event remember the Great East Japan Earthquake of 2011 and commemorate the service of those that assisted in the relief efforts.

March 11, 2021 marks the 10th anniversary of the Great East Japan Earthquake. Keynote speakers RADM Robert Girrier, USN (Ret.) and Mr. Kimiaki Toda, Mayor of Ofunato City in Japan, reflected on how the U.S.-Japan alliance responded to this tragedy and how the U.S. and Japan have worked together on disaster relief, recovery, and reconstruction in the years since. RADM Girrier held a leadership position in Operation TOMODACHI, a joint relief effort by the U.S. and Japanese militaries, as Commander of the USS Ronald Reagan Strike Force Group, and he described his experiences working on this important mission. Mr. Toda, mayor of a city hit hard by the disaster, spoke on the relief process and the importance of friendship between the U.S. and Japan to rebuilding efforts.

Other highlights of the event included a welcome message from The Hon. Akira Muto, Consul General of Japan in Los Angeles, remarks on the U.S.-Japan alliance by Major General Hiroyuki Sugai, Air and Defense Attaché, Embassy of Japan in Washington, D.C., and an overview of JUMP by Dr. Satohiro Akimoto, Director of JUMP and President & Chairman of Sasakawa USA.

This was a free online event for members of U.S. Army, National Guard, Navy, Marine Corps, Air Force, and Coast Guard, as well as their dependents and U.S. government civilians who have served in Japan at any time in their career. Spouses and interested civilians were also welcome to join.

This event is held in cooperation with the Japan Society of San Diego and Tijuana, the National Association of Japan-America Societies, and Sasakawa USA.