Above: The USS Midway Museum (Courtesy of the Japan America Society of San Diego and Tijuana)

JUMP, in cooperation with the Japan-America Society of San Diego and Tijuana, invited over 100 members to attend the 17th Annual Beer & Sake Festival at the USS Midway Museum on June 13, 2019. The event started at 7:00 p.m. on the flight deck of the museum. 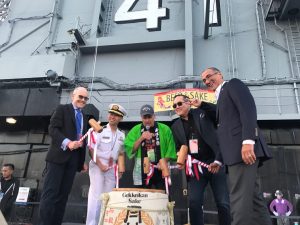 JUMP offered a limited number of complimentary tickets to our members. Our members were also joined by 25 officers of the Japan Maritime Self Defense Force Training Squadron. In total, the festival had 800 attendees and over 200 vendors, volunteers, and staff. We were joined by representatives of the Japanese Maritime Self Defense Forces who flew in from Washington, as well as Mr. Akira Chiba, the Consul General of Japan in Los Angeles.

This event was also supported by the National Association of Japan-America Societies and Sasakawa USA.

We would like to thank the Japan-America Society of San Diego and Tijuana for their hard work. We would like to especially thank Mr. Dave Tuites for all of his hard work and dedication. We look forward to next year’s event!