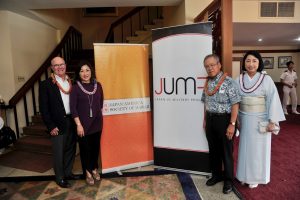 JUMP, in cooperation with the Japan-America Society of Hawaii, hosted the third annual JUMP in Hawaii reception at the Official Residence of the Consul General of Japan in Honolulu on Tuesday, June 4, 2019.

JUMP brought together the local community of Americans who have served in Japan, and we were fortunate to have join us 100 newly commissioned officers of the Japan Training Squadron, who sailed into Honolulu on the JS Kashima and JS Inazuma. Opening remarks were made by Ms. Yuri Higashi, Consul for Defense Affairs, and Ms. Reyna Kaneko, President of the Japan-America Society of Hawaii.

The Japan Training Squadron Band and the Pacific Fleet Band joined together to entertain the crowd with a mix of Japanese and American songs. A truly great example of the collaborative spirit and friendship between our nations. 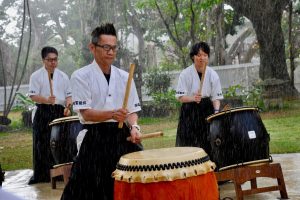 Taiko drummers performed in the rain. (Credit to Raymond Tabata)

We would like to give a special thanks to Consul General Koichi Ito and Mrs. Ito for graciously hosting the event at their residence.

This event was also supported by the National Association of Japan-America Societies and Sasakawa USA.

If you are interested in seeing more photos from the event, please check our our gallery page.

The following video was produced by the Japan Maritime Self-Defense Force (JMSDF) following the event. This video features the harmony created by the joint efforts of the Japan Training Squadron Band and the Pacific Fleet Band.