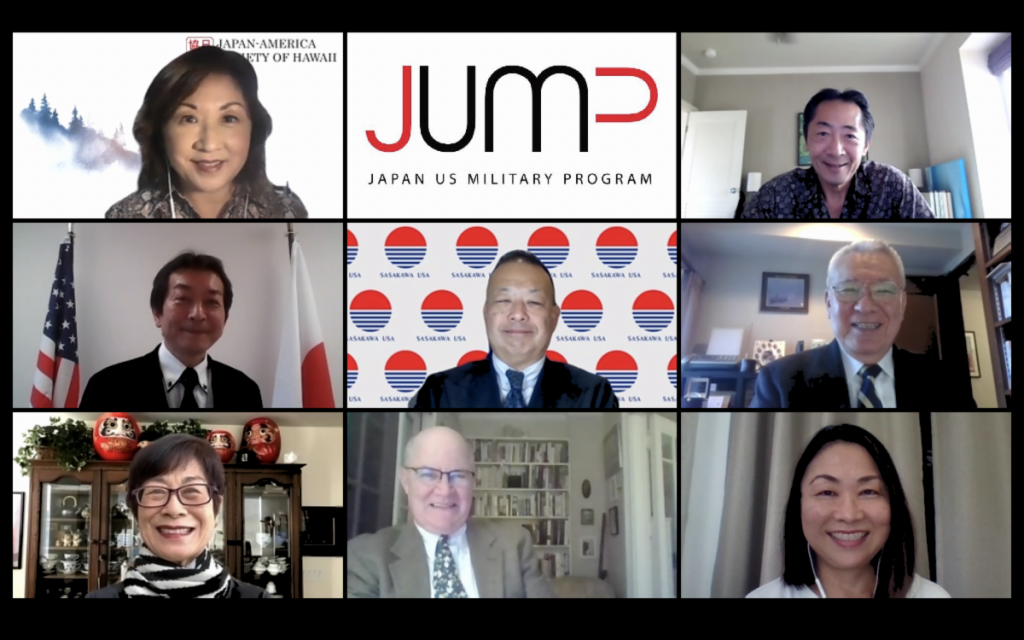 On Tuesday, February 16, 2021, the Japan-U.S. Military Program (JUMP) hosted a special online event to celebrate our service members and the Japan-U.S. relationship with the Japan-America Society of Hawaii (JASH). This was a free online event for members of U.S. Army, National Guard, Navy, Marine Corps, Air Force, and Coast Guard, as well as their dependents and U.S. government civilians who have served in Japan at any time in their career. Spouses and interested civilians were also invited to join.

This year’s event with JASH marked the first time the current Commander of U.S. Indo-Pacific Command (USINDOPACOM) has spoken at a JUMP event. Admiral Philip Davidson, the current INDOPACOM commander, spoke about the importance of the U.S.-Japan alliance to regional security in the Indo-Pacific. Vice Admiral Yoji Koda, the other keynote speaker, discussed cooperation between the U.S. Navy and Japanese Maritime Self Defense Force during the relief efforts following the Great East Japan Earthquake in March 2011.

Other highlights included special remarks from The Hon. Yutaka Aoki, Consul General of Japan in Honolulu, as well as messages from Mr. Peter Kelley, President of the National Association of Japan-America Societies, and Dr. Satohiro Akimoto, Director of JUMP and President of Sasakawa USA.

Thank you to all of the speakers and everyone who joined us and our partners in celebrating the Japan-U.S. relationship.

-The Hon. Yutaka Aoki, Consul General of Japan in Honolulu

-Dr. Satohiro Akimoto, Director of JUMP, Chairman of the Board, and President of Sasakawa Peace Foundation USA