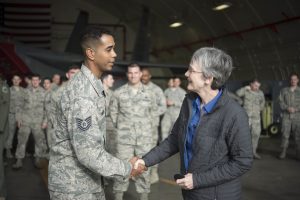 The third Japan-U.S. Military Program (JUMP) Annual Dinner was held on Wednesday, March 28, at the Army and Navy Club on Farragut Square in Washington, D.C. Secretary of the Air Force, the Hon. Dr. Heather Wilson was the keynote speaker. The reception began at 5:00 pm in the Ballroom, and dinner was served at 6:00 pm in the Main Dining Room (one seat per registrant). The suggested uniform was Service “A” for service-members and business attire for civilians and retirees. The invitation-only event was for JUMP members. (See below for how to join JUMP and receive an invitation to next year’s event.)

The Hon. Dr. Wilson is the 24th Secretary of the Air Force and is responsible for the affairs of the Department of the Air Force, including the organizing, training and equipping and providing for the welfare of 660,000 Active-Duty, Guard, Reserve and civilian forces their families. She oversees the Air Force’s annual budget of more than $132 billion and directs strategy and policy development, risk management, weapons acquisition, technology investments and human resource management across a global enterprise.

The 2017 dinner featured a keynote address by the Chief of Naval Operations, Admiral John Richardson, who discussed the state of the U.S.-Japan alliance and the challenges of growing maritime competition in the Asia Pacific, and a speech by Admiral (ret.) Dennis Blair, former Director of National Intelligence and Commander of U.S. Pacific Command.