In the Dragon’s Shadow: Southeast Asia in the Chinese Century (YCAPS-JUMP)

In the Dragon’s Shadow: Southeast Asia in the Chinese Century (YCAPS-JUMP) 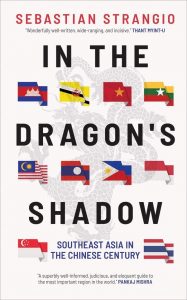 On Wednesday, January 13, the Yokosuka Council on Asia-Pacific Studies (YCAPS) hosted an online event with Mr. Sebastian Strangio, author of In the Dragon’s Shadow: Southeast Asia in the Chinese Century. The book examines China’s growing influence in Southeast Asia and investigates how countries in the region are reckoning with increasingly difficult decisions on strategic alignment with Beijing and Washington. In the book, Mr. Strangio also looks at how Southeast Asia has evolved to become a major theater for great power rivalry.

In the online webinar, held as part of the YCAPS Community Conversation Series, Mr. Strangio analyzed how views of China amongst Southeast Asian countries are responding to China’s economic, military, and political influence. A Q&A discussion with the YCAPS community followed Mr. Strangio’s remarks.

For more information and YCAPS and their events, please visit the YCAPS website.

Since 2008, Mr. Strangio’s writing from the region has appeared in Foreign Policy, The New York Times, The Economist, The New Republic, Forbes, Al Jazeera, and The Atlantic, among many other publications. In addition to living and working in Cambodia, where he spent three years reporting at The Phnom Penh Post, he has also reported from Myanmar, Vietnam, Laos, Thailand, China, India, Indonesia, Bangladesh, South Korea, and the Russian Far East. In 2014, Mr. Strangio’s first book, Hun Sen’s Cambodia was published by Yale University Press to widespread acclaim.

Mr. Strangio holds a B.A. and Master’s degree in International Politics from The University of Melbourne, where he was first initiated into journalism as co-editor at the monthly student magazine Farrago. He is currently based in Chiang Mai, Thailand, where he is an affiliated researcher at the Regional Center for Social Science and Sustainable Development at Chiang Mai University.