JUMP held a reception with Naval Air Station Mayport in Jacksonville, Florida on June 13 as a celebration of the U.S-Japan Alliance. The reception was organized by the Consulate General of Japan in Miami.

Click here to view a press release issued by the Consulate General of Japan in Miami.

• When:  June 13, 2017 from 5:00 p.m. to 8:00 p.m.
• What: The evening started with cocktail hour and a taiko drum performance, followed by a toast by Consul General Ken Okaniwa, and then a buffet dinner. After dinner, Commander Toraason, Commander Chekouras, and Rear Adm. Sean Buck gave remarks. Following their remarks was a presentation by Consul General Okaniwa and another taiko performance.
• Where: Naval Air Station Mayport, Jacksonville, Florida 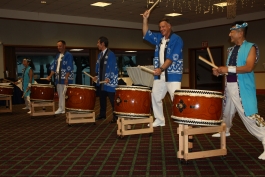 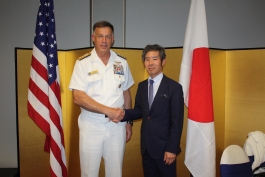