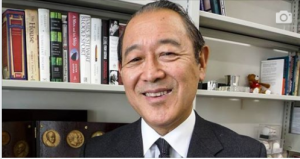 Yokosuka Council on Asia-Pacific Studies (YCAPS) and JUMP hosted a discussion with Ambassador Ichiro Fujisaki on February 27. This was YCAPS first event near Yokota Airbase, a keystone facility for U.S.-Japan Alliance cooperation.

Ambassador Fujisaki described his views as he looks outward from Japan and thinks about the international political situation in Northeast Asia. The interplay between North Korea, China, Russia, the United States and Japan is becoming increasingly complex, and in the views of many, more dangerous.

The event was free of charge.

• When: February 27, 2018, 6:30 p.m. to 9 p.m.
• Location: 3rd Floor Assembly Room, Fussa Citizen’s Hall (福生市民会館) 〒197-0011 Tōkyō-to, Fussa-shi, Fussa, 2455
• Venue Access: The Fussa Citizen’s Hall is a 6 minute walk from Ushihama station (Chuo/Ome line). There is free parking in the large covered garage near the corner of Route 16 and the Yokota Supply Gate. Transportation from Yokosuka will be provided for those who contact info@ycaps.org before 20 Feb.

Ambassador Ichiro Fujisaki is one of Japan’s most experienced and respected diplomats and commentators on international relations. From 2008 to 2012, Fujisaki served as the Ambassador of Japan to the United States, leading Japan’s negotiations with the U.S. on security and trade issues. Fujisaki was also instrumental in bridging Japan and the U.S. following the devastating earthquake and tsunami in March 2011.

As the Deputy Foreign Minister, he served as Prime Minister Koizumi’s personal representative to the G8 Summit (2002-05). He was Japan’s chief trade negotiator and headed the teams for Free Trade Area agreement negotiations with the Republic of Korea, Malaysia, the Philippines, and Thailand. During his career, he initiated and headed Deputy Ministerial dialogue with China, and traveled frequently to India to lay the groundwork for large-scale infrastructure projects which are currently underway.
Ambassador Fujisaki remains close to Japan’s political, bureaucratic, and business circles. He is currently President of the America-Japan Society, a non-profit and non-political organization with a mission to promote understanding between the United States and Japan. He is also a Distinguished Professor at Sophia University and a Visiting Professor at Keio University, both in Tokyo.