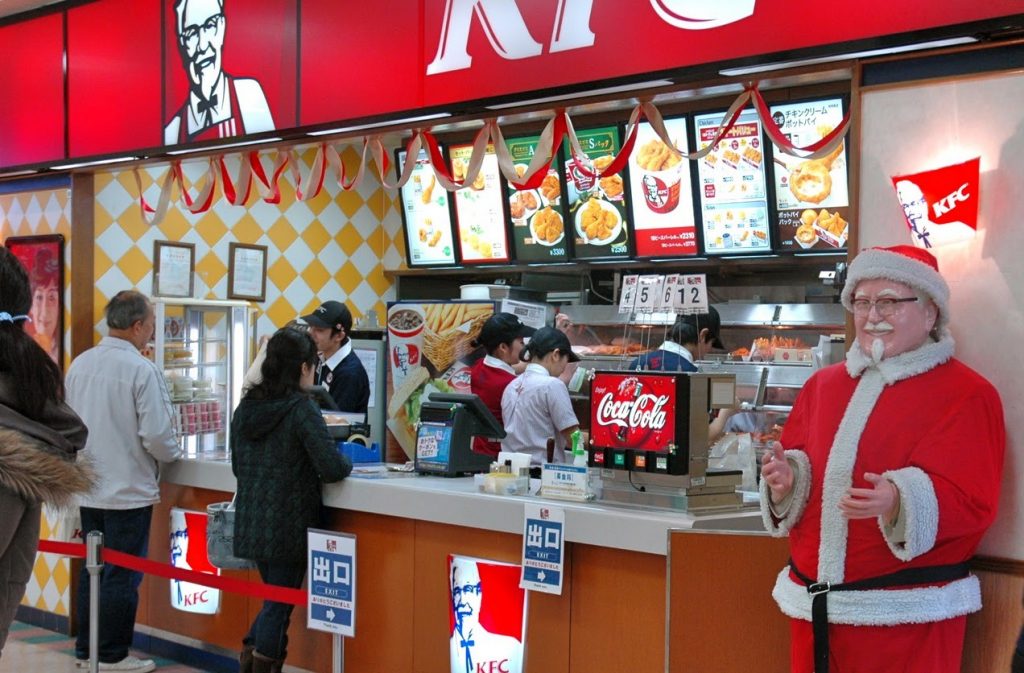 Brian Graf, a Sasakawa USA staffer who is on the JUMP team, wrote this blog reflecting on his first time experiencing Christmas in Japan.

Christmas is a time to be with family. Personally, my family celebrated with the same meal every year – sweet potatoes, ham, some green beans, maybe a little cranberry sauce. But not in 2014.

After I had been away from my then-girlfriend for some time due to school, I decided to spend the 25th of December with her and her family in Japan. My mother was none too pleased, I can assure you, but she acquiesced to my decision nonetheless, as did the rest of my family, so I bought my ticket.

Prior to that, I had lived in Japan for six years. I had heard about strange and mysterious customs surrounding the celebration of Christmas, but every year I had faithfully returned to my home in the United States for the holidays. So I had yet to experience the Japanese Christmas.
How do the Japanese take part in Christmas, you ask? Well, Christmas is thought of as an American holiday, so many celebrate by participating in the most American way they can think of – by ordering food from one of America’s most prolific fast food chains that also happens to have a wide presence in Japan – Kentucky Fried Chicken.

Not only do many Japanese revelers eat KFC, but they do so in such great numbers that you may be required to place your order as far as two months in advance to secure a box of the Colonel’s greasy goodness.

This is why, on Christmas day, almost two thousand and fifteen years after the birth of Jesus, I found myself freezing my drumsticks off while waiting in line outside of a KFC. All the Japanese people I was waiting in line with kept giving me glances and murmuring to each other. I assume that they took my presence as a tall white guy with a look of mild horror and confusion on my face as some sort of confirmation that this was completely normal, and that they were all culturally progressive.

Never in my life have I felt so un-American and at the same time somehow oddly patriotic. Waiting in line for American fast food on Christmas day, although not traditional, seems like some kind of satire of Americans that you might see published in a political cartoon.

As I sat there with my girlfriend and her family eating that crispy chicken, I couldn’t help but enjoy the irony that this was perhaps the second or third time in my life that I had ever eaten KFC. But there I was, a mascot of the American people in this country, wolfing down chicken breasts and thighs like I had been waiting all year for this moment. I’ll be honest, I regret nothing.

How do you celebrate the holidays in Japan? Show us your best photos for our #HolidaysInJapan photo contest for a chance to win $100 in prizes!